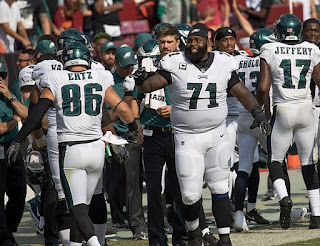 (Photo credit: Keith Allison/Wikimedia Commons)
Charles Herrmann (@HermsNFL)The Lateral Chief Editor
Pretty sure you know how this works.
If not, a boom performance requires a player outperforming their points projection and the opposite applies to bust. Simple as can be. Using PPR FantasyPros projections, let's take a look at the guys I expect to do well and those I anticipate performing poorly relative to expectations for Week 2 of the NFL season.

Week 2 Booms
Quarterback (QB)
Mitchell Trubisky (16.9 projected points)
Per the expert notes of Mike Tagliere on Trubisky's FantasyPros profile, the Giants have allowed QBs to score at least 17.1 points in 15 of the 17 games that have taken place since the beginning of last season.
Is Trubisky volatile as hell? Definitely, but the Giants defense is pretty bad. They looked decent at the beginning of the Week 1 MNF against the Steelers, but they were figured out early and subsequently torched. This pick is not about my level of confidence in Trubisky even remotely; it's just too good of a matchup to pass up.
Running Back (RB)
Ronald Jones II (13.2 projected points)
Speaking of awful defenses that can be taken advantage of, the Tampa Bay Buccaneers will probably be able to manhandle the Carolina Panthers with ease. Last week, Las Vegas Raiders RB Josh Jacobs managed to put up 3 TDs against them en route to finishing as the overall RB1.
And look, I get it. The (potential) impending doom of Leonard Fournette leapfrogging him on the Bucs depth chart does scare people away from wanting to play Jones II. Honestly, that doesn't concern me much for this week at the very least. It's not like Jones II has to even be all that efficient to ball out here. All he's got to do is fall into the end zone and rush with moderate success to get to/let alone surpass 13.2 points.
Wide Receiver (WR)
Scotty Miller (8.5 projected points)
Piggybacking on what I said above, this is a great game to exploit across the board. Starting Tampa Bay players feels like a good move this week. With Chris Godwin being listed as doubtful, Miller finds himself in a similar situation to the one last week in which a hobbled WR Mike Evans largely used as a decoy. The elevated role as a result of injuries at WR around him propelled Miller to a 12.9 point output against the New Orleans Saints, a defense much stronger than that of Carolina's. If you're in a pinch, give Miller a whirl.
Tight End (TE)
Logan Thomas (7.9 projected points)
Unless you have a Travis Kelce or a Mark Andrews on your team, the best way to attack the TE position is looking for the guy who you feel is most likely to land in the end zone in a given week. The Arizona Cardinals defense is very bad at stopping TEs in fantasy, and last week, the Washington Football Team's Logan Thomas turned 8 targets into 4/37/1 against the Philadelphia Eagles. This week, he draws those dreadful Cardinals. I'm rolling with Thomas on this one.
Defense/Special Teams (DST)
New Orleans Saints (6.1 projected points)
The Saints DST finished 2019 at 8th overall. Even with an improved offense from last year, I'm not particularly threatened by the Las Vegas Raiders. Assuming the Saints can contain Josh Jacobs and force Derek Carr to beat them, going over 6.1 doesn't seem that difficult. Hell, they put up 15 against Tom Brady and the Bucs last week. Geaux with the Saints here.
Kicker (K)

Daniel Carlson (6.6 projected points)
Words cannot describe the disdain I feel toward kickers in fantasy football. I believe they are a colossal waste of time and energy. But if you are still in a league with kickers (unfortunately a lot of us are), a quick trick to use when determining who to play is just looking at the Vegas odds, finding a game with a high score projection, and picking one of those guys. I took a look at this and settled on Raiders kicker Daniel Carlson as a good bet this week. In a high scoring affair last week, Carlson put up 12 with ease. I can see him going over 6.6 here again.

Week 2 Busts
Quarterback (QB)
Kyler Murray (20.6 projected points)
The Washington Football Team's front seven looks like an absolute terror if what we saw last week is any indication. Murray has the wheels to manufacture points and this is going to be a game in which that skill is tested. Carson Wentz only managed a performance good enough to be QB23 in Week 1 against this Washington D. Murray's rushing prowess may be able to keep him afloat, but he isn't someone I feel particularly enthusiastic about trusting this Sunday. Of all of these picks, this is the one I feel the least comfortable with but screw it.
Running Back (RB)
Kenyan Drake (15.9 projected points)
Couple the logic from above with the fact that Drake is my 2020 RB bust pick and here we are. I also sent out a tweet a few days ago looking at some of the more intriguing backfields and how Week 1 snap counts shook out. Despite playing far more than Edmonds, the pair didn't finish that far apart in scoring last week. I'm more inclined to view Drake as a flex.
Wide Receiver (WR)
Cooper Kupp (15.6 projected points)

Ever since the Higbee breakout last year, Kupp just doesn't get the targets necessary to be a huge force in fantasy without scoring a TD. I don't see last week's WR57 doing that well in Week 2 likely facing Eagles CB Nickell Robey-Coleman.
Tight End (TE)
Zach Ertz (13.5 projected points)
Candidly, I don't feel particularly strongly against any of the big TEs this week and I also don't feel like it's worthwhile to dunk on a bubble guy. The fairest thing to do in my mind is just point out how well Dallas Goedert did last week in comparison to Ertz and say it's entirely possible we see that again. I'm not exactly looking to bench Ertz necessarily, but we may see another week pointing toward the idea that he is no longer the Eagles TE1.
Defense/Special Teams (DST)
Chicago Bears (8.0 projected points)
The Giants were not world beaters against the Steelers last week and that had a lot to do with the running game never taking off. In Week 2, I'm not looking at Saquon Barkley putting up another stinker again. When you consider the fact(s) that this Bears squad only managed 3 points against Detroit last week and the Steelers defense, a unit much better than that of the Bears, matched the 8 point projection for Chicago this week against the Giants last week basically sans Saquon, it's reasonable to see why this one could be tricky.
Kicker (K)
Tyler Bass (7.7 projected points)
Back to the Vegas odds: Bills at Dolphins has the lowest over/under and I see Tyler Bass is listed as the projected K7. Miss me with that one and stop playing kickers in fantasy.
Follow The Lateral on Twitter (@TheLateralFF)
2020 Season Boom/Bust Charles Herrmann FantasyPros PPR The Lateral Week 2