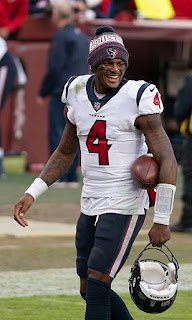 (Photo credit: Keith Allison/Wikimedia Commons)
Malcolm McMillan (@McLateralFF)
The Lateral Writer
Boom/Bust (or Love/Hate if you are the Talented Mr. Roto) is a fantasy football classic, but in case you are new to the game, here is the gist:
Every week, we will look at the FantasyPros projections, and pick a player at each position that we think will outperform their projections (boom), or fall short of expectations (bust).
That is really all there is to it. Largely, this is based on matchups, but we could potentially see a projection that seems flawed, and factor that in as well. No need to re-invent the wheel on this one.
Week 2 Booms
Quarterback (QB)
Joe Burrow (15.2 projected points)
23 fantasy points. That is what Lamar Jackson did with his arm alone in his Week 1 matchup against a truly bad Cleveland Browns DST. Given that the Cincinnati Bengals DST mediocre at best when healthy (which they are not), expect Burrow to need to use his arm Thursday night to get the win. 18 points tonight should be easy, and 20+ would not surprise me.
Running Back (RB)
Latavius Murray (7.8 projected points)
There is a difference between a "boom" pick and a "start" pick. While I probably would not start Latavius Murray except as a FLEX if I was desperate, the potential to exceed his paltry 7.8 projected points is pretty high with Michael Thomas likely out. In retrospect, Murray was pretty unlucky to not capitalize on his red zone touches, with 0 TDs despite 6 looks, which was the same as Week 1 RB8 Alvin Kamara. Murray likely just needs to stumble into the end zone to beat his projections. 10+ points should not be considered impossible.
Wide Receiver (WR)
Corey Davis (9.8 projected points)
Was literally writing this about Davis' teammate A.J. Brown... and then the news came through that Brown is likely week-to-week with a bone bruise. So sign me up for Corey Davis, who in Week 1 gave the Davis-truthers a reason to celebrate with a WR21 finish. Against a good defense, I would be concerned about Davis simply being double teamed and shut down, but luckily Jacksonville is not a good defense (do not let the interceptions from Week 1 fool you), so I expect Tannehill to continue targeting Davis heavily.
Tight End (TE)
Austin Hooper (9.0 projected points)
This one is tricky. Basically, the question is, do you believe that Hooper will score a TD this week? Between the absence of Cleveland's lone TD scorer from Week 1, Baker's apparent inability to throw downfield, and that Hunter Henry did well against the Bengals, I feel comfortable betting on the TD upside with a talented TE. A hybrid of David Njoku and Hunter Henry's stat lines would be 5/73/1, which would be good for 18.3 points in PPR.
Defense/Special Teams (DST)
Minnesota Vikings (6.0 projected points)
Look, the Jacksonville JAGs scored 6 points last week against the Indianapolis Colts, and as the name suggests, they are just a bunch of JAGs. While Minnesota got thrashed by the Green Bay Packers in Week 1, let us not forget that the Packers may actually be just as good as the team that went to the NFC Championship last year. For some perspective, the Vikings finished DST6 last year, but finished DST15 and DST8 last season in their games against Green Bay. Fine, but below their standards each time. Give me the Vikings in a revenge game with a couple former Pro Bowlers against Philip Rivers and his propensity to throw the ball to the defense at least once a game.
Kicker (K)

Josh Lambo (6.5 projected points)
Currently the best kicker in the league, Lambo finished 2019 as K6, averaging 8.4 points. He had 10 of 16 games in 2019 where he finished with 7+ points, and only missed one FG the entire year. His stat lines against Week 2 opponent Tennessee? 10 points in Week 3 and 9 points in Week 12. Easy "boom" candidate for me.

Week 2 Busts
Quarterback (QB)
Deshaun Watson (19.6 projected points)
The Ravens DST is good. Like, really good. Certainly better than the Kansas City Chiefs DST (who, for the record, are not bad), who held Deshaun Watson in check until garbage time en route a QB12 finish. I like Watson a lot, and he is going to continue to have good games where he needs to run the ball to keep Houston in the game, but this is just a bad matchup. The only way he hits this projection is if QB14 continues to score 20+ points a game.
Running Back (RB)
Jonathan Taylor (15.9 projected points)
Do not take this as an indictment of Jonathan Taylor's skills. The guy is good, and will finish as an RB2 at minimum. But this will be his first game as the starter, and in Week 1 him and Nyheim Hines got even looks despite Marlon Mack going out fairly early into the game. While the Vikings were awful against the run in Week 1, giving up 158 yards, I fully expect them to bounce back in what will be a competitive Week 2 matchup. Still start Taylor, just do not be shocked when the results are a bit more pedestrian.
Wide Receiver (WR)
Tyreek Hill (17.6 projected points)
Hill did not do well against the Chargers last year, and with the way that the Los Angeles secondary largely silenced the talented Bengals WRs, who struggled to a combined 24.8 PPR points. While Mahomes is clearly a step up from Joe Burrow (as much as I love Burrow), I expect Kansas City to rely more on their shiny new toy Clyde Edwards-Helaire and control the game, rather than needing to break out Tyreek Hill's speed. Even the 10.1 PPR points from Week 17 last season would be a far cry from 17.6 projected points.
Tight End (TE)
T.J. Hockenson (9.9 projected points)
Week 1 2019, T.J. Hockenson burst onto the scene with a TE2 PPR finish and 25.1 points. He finished the season as TE31, missing several games and struggling to catch the ball. Kenny Golladay could continue to be on the sideline, which may allow Hockenson to continue to feast, but history shows so far that Week 2 regression is likely for this second-year TE.
Defense/Special Teams (DST)
Cleveland Browns (7.6 projected points)
Cleveland Browns DST points to date in 2020 are 0.0. Burrow is my "boom" pick at QB, and therefore the Cleveland DST almost has to be my "bust" by default. Luckily for me, they also are not very good, nor were they particularly good last year. Between the higher scoring performance from Cincinnati and that Burrow will prioritize working on the turnovers, expect the Browns to be a bust Thursday night.
Kicker (K)
Greg Zuerlein (8.3 projected points)
Dallas should find the end zone enough against Atlanta to make it an easy day for Zuerlein, and every TD means one less FG opportunity for Zuerlein. The projected 2.9 extra points may be a little low, but the 2.3 FG attempts feels high. Case and point? Jason Myers last week against the Falcons had 5 extra points but only 1 FG.
Follow The Lateral on Twitter (@TheLateralFF)
2020 Season Boom/Bust FantasyPros Malcolm McMillan The Lateral Week 2