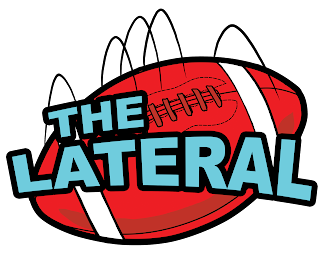 Start/Flex/Bench is basically The Lateral's version of rock, paper, scissors. No... that doesn't seem right. It was some other three word game. Not sure why the name is escaping me, but I think the youths these days refer to it as FMK on the interwebz.
Regardless of what the name of that silly other game is, the point of the exercise is simple; for every match-up in a given week, Charles and Malcolm will give their picks for who you should start in your lineup, throw into your FLEX spot/stream if we're talking QB or TE, and who to leave on the bench. Charles will pick for all the AFC teams, and Malcolm will pick for all the NFC teams.
Other things to keep in mind are this exercise is done with a 1 QB, 2 RB, 3 WR, 1 TE, 1 FLEX, 1 K roster playing PPR format in a 12-man league in mind, but ultimately the picks should be applicable to most fantasy rosters.

NE: Start QB Cam Newton, flex WR Julian Edelman, sit the rest. I do like what we saw out of WR N'Keal Harry though. He may start gaining some stream here soon.

MIN: Start RB Dalvin Cook and WR Adam Thielen, stream nobody, flex nobody, and bench everyone else. This team is a dumpster fire.

TEN: Start RB Derrick Henry/TE Jonnu Smith, stream QB Ryan Tannehill. As for the others, follow WR A.J. Brown's health status for more clarity about what to do with he and WR Corey Davis. Bench WR Adam Humphries in all likelihood.
Cleveland Browns vs Washington Football Team (Sunday 1 pm)
CLE: Start the RBs/WRs Odell Beckham Jr. and Jarvis Landry, flex no one, bench QB Baker Mayfield (I know the matchup is appealing but I'm uneasy on this one) and TE Austin Hooper.
WAS: Start the DST and TE Logan Thomas (you could also stream these), also start  WR Terry McLaurin, flex RB Antonio Gibson, and bench QB Dwayne Haskins and the other RBs.

LAR: Start TE Tyler Higbee, flex WRs Robert Woods (though likely you are forced to start him anyway) and Cooper Kupp, stream QB Jared Goff if you could not get Jacksonville QB Gardner Minshew II this week, and you should bench the RBs until this RB corps shakes out a bit more.
Atlanta Falcons vs Chicago Bears (Sunday 1 pm)

ATL: Start WR Calvin Ridley, WR Julio Jones (only if he is healthy), and TE Hayden Hurst, as well as the guy throwing them the ball (QB Matt Ryan), flex WR Russell Gage (start him if Julio sits this one out), and bench RB Todd Gurley (yes I am serious).

CHI: Start RB David Montgomery and WR Allen Robinson II, stream QB Mitchell Trubisky and the DST, flex nobody unless you still believe in WR Anthony Miller's ability to be relevant in this offense (I do not), and bench TE Jimmy Graham and RB Tarik Cohen.

LAC: Against Carolina, the whole Chargers crew is a start (including the DST) with the exceptions of QB Justin Herbert as more of a stream and WR Mike Williams as more of a flex.

NYJ: Not touching this team with a 10-foot pole. Maybe flex WR Jamison Crowder if healthy but even then I don't love it and he's my guy.

DAL: Start QB Dak Prescott, all three WRs (I have a feeling this will be the Michael Gallup breakout game), and RB Ezekiel Elliott, technically you should flex Gallup, but I feel confident enough to list him as a start, stream TE Dalton Schultz (I want one more week of production before making him a start), and bench the DST (which hopefully you were already doing).

DET: START WR KENNY GOLLADAY (God, it felt good to say that finally), along with QB Matthew Stafford and TE T.J. Hockenson (I think he eventually falls off, but it will not be against Arizona), flex WR Marvin Jones, Jr. and RB D'Andre Swift, and bench RB Adrian Peterson along with all the other Lions WRs.

NO: Start RB Alvin Kamara and TE Jared Cook, flex WR Tre'Quan Smith, and bench everyone else including QB Drew Brees (aka Breesus Christ) and the DST. You could play the DST because of the talent, but I would recommend benching them and picking up a streamer to start instead.

GB: Start RB Aaron Jones, QB A.A.ron Rodgers, and (if healthy) WR Davante Adams, flex WRs Marquez Valdez-Scantling and Allen Lazard regardless of Adams' health, and bench everyone else (though you could stream the DST if you are desperate).

*BONUS*: Monitor WR Miles Boykin. He hasn't had a ton of targets but he's good with the ones he's gotten and should be flagged as a watch list guy.

KC: Start the obvious guys you picked presumably in the first 2-3 rounds of your draft for a reason, bench the rest.