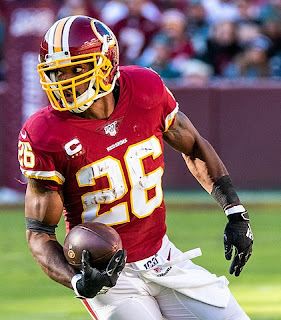 Charles Herrmann (@HermsNFL)The Lateral Chief Editor
As of 4 p.m. EST today, all 32 NFL rosters have been cut down to the official 53-man size. This is a fun day for fantasy football enthusiasts and fans alike as some familiar names end up being surprise cuts, or even trades, from their respective teams. The impact of these moves can provide a certain level of clarity to particular situations. It occasionally takes time for news to trickle out, so we waited a bit before compiling this list.
We've already seen one significant name, Leonard Fournette, let go by the Jacksonville Jaguars and promptly settled in on a new squad, the Tampa Bay Buccaneers. Considering the fact that the move took place before yesterday, his name will not appear on this list of who we at The Lateral consider to be the 5 most fantasy relevant 2020 roster cut day moves. We will be taking a look at not only the player who got released but also what it means for the team they leave behind. Let's get into it.
Adrian Peterson (RB, Washington Football Team)
The difficult thing about deciphering the Washington backfield for much of this offseason was the fact that it was crowded. Between incumbent starter Adrian Peterson, free agent signings J.D. McKissic and Peyton Barber, 2020 3rd round draft pick Antonio Gibson and 2019 4th round pick Bryce Love, the whole thing was a hot mess. But as of yesterday, things became much clearer after the release of Adrian Peterson.
This tells us 2 things:
The big winner here is Gibson. Despite only having 33 carries at the Univeristy of Memphis last season, Gibson's versatility both as a receiver and running back make him a dynamic football player. Measuring at 6' 0" and 228 lbs. with a 4.39 40 time at the NFL Combine, Gibson athletically compares favorably to Cincinnati RB Joe Mixon. Initially coming in at RB48 in The Lateral's RB rankings due to the uncertainty of the backfield, Gibson is an easy riser. While his draft cost may rise to an uncomfortable price, Gibson seems like a quality gamble for 2020.
Additionally, Love was listed as a "best of the rest" guy in our RB rankings list and should still be considered as such, however rostering Love on your bench may prove to be fruitful as time goes on. As for Peterson, three teams have reportedly already expressed interest in the future Hall of Fame RB. His fantasy prospects are wholly dependent on landing spot but should be monitored.

[EDITOR'S NOTE: With recent news of Adrian Peterson signing in Detroit, this only spells bad news for Kerryon Johnson and rookie D'Andre Swift to begin the year. I would still anticipate Swift takes over at some point once he regains his health, but this feels like the nail in the coffin for Kerryon in Detroit. I would avoid the backfield altogether with the exception of Swift as a piece of bench depth with 2nd half upside at the proper value.]
Lynn Bowden Jr./Theo Riddick (RB, Las Vegas Raiders)
In a relatively shocking move, the Raiders dealt 2020 3rd round pick RB/WR Lynn Bowden Jr. and a 6th round pick to the Miami Dolphins for a 4th round pick. In a separate move, the Raiders also waived recent signee and pass catching specialist RB Theo Riddick.
Riddick not being kept by the Raiders makes it so that Josh Jacobs' only competition for targets in the passing game will come from Jalen Richard (and to a lesser degree Devontae Booker). The potential for Jacobs to expand his role from 2019 by gaining receiving targets has been a topic of discussion for a while now, and even HC Jon Gruden himself said early on about the team's desire to do so. Initially coming in at RB11 in our rankings, Jacobs now finds himself in a position to bump even higher potentially around our RB9 Miles Sanders. For those drafting tonight or later, keep an eye on Jacobs as a late-1st/early-2nd round pick that can surprise for 2020 now that much of his competition for receptions have evaporated.
As for Bowden Jr., a Swiss Army knife guy coming out of Kentucky where he played WR and QB after some injuries to the roster that also posed as a passing game threat to Jacobs in Las Vegas, his future in Miami has some intrigue. Per Barry Jackson of the Miami Herald, the Dolphins seem to have interest in Bowden Jr. as a WR rather than the RB the Raiders were trying to mold him into. Considering WRs Allen Hurns and Albert Wilson opted out of the 2020 NFL season due to COVID-19 concerns and the fact the team also cut WRs Chester Rogers and Ricardo Louis, the Dolphins are fairly thin at the position with DeVante Parker, Preston Williams, and Jakeem Grant as the only notables remaining. While perhaps having more dynasty value than redraft value, Bowden Jr. has been put in a very interesting position as a member of the thin Miami passing game.

Between the lack of addressing of the position through free agency or the NFL Draft in recent years, the Packers were already very thin at the wide receiver position. WR Devin Funchess opted out of 2020 a long time ago now and as of today, it is now even thinner as Green Bay chooses to move on from WR Jake Kumerow.

Kumerow has been a favorite of QB Aaron Rodgers in recent years which makes the move all the more puzzling. To date, the former 2015 Bengals UDFA has not provided much in the way of fantasy production, but one would assume at some point the high praise he's received from one of the all-time great QBs in NFL history would eventually result in something. Well, guess not then.

The reason this move makes the list is that it helps to narrow down who the WR2 behind Davante Adams: Allen Lazard or Marquez Valdes-Scantling. The colloquially known MVS has been the recipient of Rodgers' praise in camp this offseason, but the same can also be said about Lazard. One thing we do know is that whoever it is that ends up being the #2 behind Adams will have solid fantasy appeal. It is tough to say as of now exactly who that will be, but at least it's down to a pair of WRs now.
DeAndre Washington (RB, Kansas City Chiefs)

After the Damien Williams opt-out, rookie Clyde Edwards-Helaire's stock soared. The question then became who will be his backup/handcuff? It was thought to be signee and former teammate of QB Patrick Mahomes at Texas Tech DeAndre Washington, but as of today, that will not be the case.
As of 2 days ago, this report about the rushing work being split with CEH and going to Darrel Williams sort of showed a peak behind the curtain, but now that status has been solidified. Kansas City will also carry RB Darwin Thompson on the roster, but as of this moment, the CEH handcuff is Darrel Williams. If you already own Edwards-Helaire or draft him tonight or at any point in the next few days, maybe look into stashing Williams on your bench behind him.
Lamar Miller (RB, New England Patriots)

With Sony Michel still recovering from offseason foot surgery, the Pats felt it necessary to go out and sign veteran RB Lamar Miller who missed all of last season with a torn ACL. After Michel came off the PUP returning to practice and Damien Harris continuing to impress in camp, Miller's necessity to the team seemingly disappeared and he is no longer in New England.
The only curious part of this is the fact that the aforementioned Harris is now reportedly out for at least Week 1 following a hand procedure, so what does this mean for the Patriots backfield? More of the same: it's the James White/Sony Michel show for now. Of the two, White is the one with the cleanest bill of health and track record and is the RB to target first of them, but taking a stab on Michel late as a zero RB candidate might not be the world's worst idea as it stands.
HONORABLE MENTION: Josh Rosen (QB, Miami Dolphins)

The former 10th pick in the 2018 NFL Draft has now cycled his way through 2 NFL teams. After being let go by the Arizona Cardinals for the 2020 2nd and 5th round picks of the Miami Dolphins, things did not go well for Rosen in Miami and now he finds himself without a team.


We would like to redirect your attention to the video below:
Follow The Lateral on Twitter (@TheLateralFF)
2020 Season Charles Herrmann Quick Takes RB Running Back Wide Receiver WR