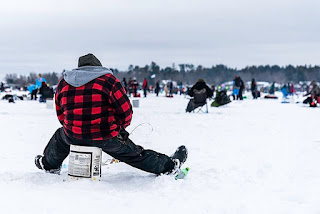 Well, well, well... you clicked the link and it worked. Welcome in for another addition of Fantasy Ice Fishing: a seemingly randomly occurring series where I, someone who has never caught an actual fish, help you find players deep in your waiver/free agent pool that might make a difference for your roster. If you didn't read the first edition of this exercise, the premise is fairly simple. With the use of FantasyPros' vast array of research tools and FantasySP.com's target and touch information, I identify players rostered around or below 20% of ESPN leagues who warrant a speculative add.

Obviously not all of these players will help you in the short term (let alone the long run) but there is always a chance maybe I'm onto something and you can be too. If you'd followed my advice last time on October 10th, you might have stashed Dolphins WR Isaiah Ford for no reason, but Broncos WR Tim Patrick and Washington RB J.D. McKissic certainly paid off if you snagged them. I'm not perfect and neither is this, but it's my blog and I'll try if I want to.

The formatting of the information is pretty intuitive, but if you get confused I have a link to another article of mine explaining it. I hope this is all useful to you and that your fantasy team wins. (All stats featured in this piece are from Week 3 on with the exception of fantasy points scored being the full season total)

Figured I'd start with something topical. The ol' duo of ESPN's Chris Mortensen and Adam Schefter dropped a fire collab a couple days ago breaking the news that RB Miles Sanders is expected to miss the next 1-2 weeks with a knee injury. The first name that comes to mind with this news is that of RB Boston Scott. He is logically the next man up in the Philly backfield and was added like crazy last night/this morning (depends on how you choose to interpret time) jumping from 14.1% to 37.5% rostered on ESPN. By virtue of that, he doesn't qualify for this piece.

But honestly, I'm not that thrilled with Scott. In Week 1 against Washington, Scott only mustered up 9 att/39 yards rushing and 2 rec/19 yards receiving (7.4 ESPN PPR points) filling in for a then-injured Sanders. Though in fairness, for me it's more about not really being stoked on the Eagles offensive line more so than anything about Scott himself. If we take a peek at Football Outsiders advanced rushing stats, Philadelphia is 6th-worst in adjusted line yards (basically a measure of how much an offensive line aids a back in helping to facilitate the run game). This team really doesn't do any favors for their RBs and put the onus on them to shake-and-bake and make things happen, so anyone who picked up Scott is banking on him being able to do that.

Can Boston Scott be effective behind an unremarkable offensive line going up against a Giants defense that gives up the 10th most fantasy points to RBs? Sure, but on the off chance he doesn't do well, there is always RB Corey Clement. He's shown the ability to fill in and do well at times in the past and obviously the cost of acquisition is considerably lower than what likely was a top waiver claim/big FAAB splurge for Scott. If Sanders comes back for the next game and adding Clement is all for naught then whatever, c'est la vie. But if Clement finds himself in a position to perform better than Scott tomorrow night and Sanders is not ready for Week 8 vs Dallas, you've already got a great waiver add ahead of time.

For those of you who are fans of a good bargain, how about a good 2-for-1 deal? I alluded to the Niners RB situation in the Week 7 waiver wire article from yesterday, but basically they're down to RB Jerick McKinnon and _________ with RBs Raheem Mostert and Tevin Coleman injured. I would like to have the back who fills in that blank running alongside McKinnon personally and you have (potentially) two options here.

The tricky thing is that Jeff Wilson Jr. is dealing with a calf injury that forced him out of the Sunday Night Football action against the Los Angeles Rams and might remove him from Week 7's game. In the past, Wilson Jr. has shown he has a nose for the end zone; take a look at those game logs. He demonstrated that ability in Week 3 @ New York Giants putting up a single rushing TD and receiving TD apiece. As the practice week goes along, keep an eye on the reports and monitor Wilson Jr.'s health. Should he be good to go, I like him a lot as a spot-start flex play, but if that doesn't happen, the alternative is pretty intriguing.

I've tweeted before about how much I like rookie JaMycal Hasty. He's a player I was made aware of over the summer in doing some prep for my startup dynasty league draft (shoutout The Podfather) and after watching his Baylor University tape, I was stoked. I even scooped him up after he was elevated from the practice squad a few weeks ago. And honestly, he looked pretty decent in that Sunday night game I talked about rushing for 37 yards on 9 attempts. There's a sizable chance adding Hasty in redraft is worthless, but I believe he has the upside to be a guy like former Chiefs RB Charcandrick West was once upon a time. It's a little ballsy, but I don't give a fuck and I'm willing to ride or die for this shit. There's a reason he was my Week 7 waiver wire add.

I did a whole dive on Perine a few days ago, so peep that for more info. He performed about as well as expected this past Sunday, but let's see if that role grows. There are worse things you can do with a bench spot than spend it on a guy who can catch passes out of the backfield on an awful team.

Fun fact: Cole Sr. is the Jaguars' team leader in every single one of those categories since Week 3 (tied w/ WR Laviska Shenault Jr. in TDs). There's the justification for this pick. I don't really feel the need to go that deep with this. Teammate D.J. Chark's injury woes have been unfortunate but both Cole Sr. and Shenault Jr. are picking up the slack just fine. The weird thing is that Shenault Jr. is 42.3% rostered; nearly 20% higher than Cole Sr.

The Jacksonville bye week is Week 8, factor that in as needed when considering this decision, but go ahead and snag him.

He may be running behind three Bills WRs, but Davis has been good when given the opportunity. Unfortunately, that opportunity has come from teammate John Brown being injured. After Brown exited the Week 3 contest against the Los Angeles Rams, Davis put up 4-4 rec/81 yards receiving and a TD (12.1 ESPN PPR points). In Week 5 against the Tennessee Titans without Brown, Davis finished the day with 5-9 rec/58 yards, no TDs (10.8 points).

With Brown not practicing today and reportedly not being at 100% per HC Sean McDermott, there's another window cracked open for Davis. In my estimation it seems like anyone getting hurt on Buffalo at the wide receiver position results in Gabe Davis being viable in this pass-happy offense. Nobody likes rooting for injury, you're a jabroni if you do, but this one is a good insurance stash. He may not be useful every week, but you never know when Davis might be a in a position to ball out like many of us thought Chiefs WR Mecole Hardman would with Sammy Watkins out.