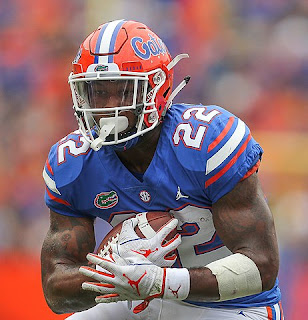 (Photo credit: Wikimedia Commons)
Charles Herrmann (@HermsNFL)
The Lateral Chief Editor
For those who are somehow unaware, RB Le'Veon Bell is no longer a member of the New York Jets and is now expected to be a member of the Kansas City Chiefs. Breaking down the impact that news has on the Chiefs backfield will be a fun task, but as someone who absolutely hates fun, I'm focusing on the squad he leaves behind. More specifically, I'm going to take a look at Jets rookie RB Lamical Perine and his fantasy potential for the remainder of the 2020 NFL season.
Why would I do this to myself? Well, as someone whose real-life occupation is centered around doing grunt work in a warehouse for the greater good of others, I'm happy to do that same type of work in my spare time for your fantasy football benefit. I'm going to look back at Perine's profile coming into the league, dig through some historical data in Adam Gase-led offenses for pass-catching backs, then I'm going to go ahead and try to answer this question: is adding Perine in your league a good idea with Bell gone?
Who Is La'Mical Perine? Through the use of his PlayerProfiler.com page, a peek at his college stats on Sports-Reference.com, and some film re-watching on YouTube, I've put together my rundown of what I feel is important to know about Perine. Take a glance at both linked pieces for better context for my evaluation.
For starters, he's former Washington RB Samaje Perine's cousin, so there's that. La'Mical was selected with the 120th overall pick in the 4th round of the 2020 NFL Draft out of the University of Florida. Having faced a high level of competition in college playing in the SEC I feel good about how to value the numbers and highlights, and while a 4th round pick is not significant draft capital, an early Day 3 pick is something.
It's apparent having watched his tape again and looking at his senior stats that his biggest asset is the ability to contribute in the passing game (40 rec/262 yards receiving, 5 TDs). I don't think his hands are tremendous but they seem to play well, plus he's large (5'11", 216 lbs.) and good enough with his technique to take on larger defenders with decent success between the tackles and in open space. The downside to Perine is his overall lack of elusiveness and the fact he's not remarkably fast (4.62 sec. 40-yard time). Generally, I don't view him that dissimilarly to Raiders RB Devontae Booker but the Player Profiler comp of Bills RB T.J. Yeldon makes sense to me as a best case, rosier view. With that profile, I'm assuming the Jets will look to work in Perine as the satellite RB2 to Frank Gore's RB1/primary rusher with chance for his role to expand if successful with his opportunity. But exactly how much does a pass-catching back matter in a Jets offense led by Adam Gase?
What's the Value of Gase's RB2? Using Pro-Football-Reference.com, I went back to 2015 from Gase's time as offensive coordinator for the Chicago Bears on through his tenure as the Miami Dolphins' head coach (2016-2018) to see how much the RB2 (usually more of a pass catcher) was used in his system. Prior to last season (with exception to the 2016 Jay Ajayi year heavily skewed by 3-4 games) having Le'Veon Bell in New York, HC Adam Gase typically utilized somewhat of a committee approach to his backfield. I won't be using this information to create projections for Perine's output, but here's what type of opportunity he may be walking into with the 3 years of historical data I feel are comparable to the present Jets situation: Adam Gase RB2 Per Game Usage (2015, 2017-2018): 7.97 rushing attempts/3.39 targets Now, if you'd like to use RB Kenyan Drake's 2018 season running behind Frank Gore in Miami as a more direct comp, I certainly get it for reasons obvious to me and likely to you the reader. Let's look at just Drake's 2018 per game usage: 2018 RB Kenyan Drake Per Game Usage: 7.62 rushing attempts/4.56 targets No matter which opportunity projection you want to use, at the end of the day given what we know about Adam Gase's propensity to utilize multiple backs for both pure rushing and more satellite purposes in lieu of a big workhorse (something he no longer has), Perine has a shot at flex value but would be unlikely to exceed ≈12 PPR points without a TD or an extremely negative game script leading to greater usage. I view Perine as an RB4 for the time being. Conclusion
Best advice: I think Perine is a pretty good deeper PPR league stash that will take 2-3 weeks to truly evaluate but should not be someone you hesitate to drop if production and usage doesn't show promise soon. Given how valuable the position of running back is in fantasy and the fact that having any decent option in that spot holds weight, there's nothing wrong with La'Mical Perine as a speculative bye week/injury filler with a mediocre floor and moderate ceiling. In the event Perine does play well and catapults himself into a larger role above Gore, that's a fun bonus, but in the NFL's 11th worst rushing attack, I don't see his ceiling in that situation growing much beyond what Miami Dolphins RB Myles Gaskin's is. In short, you're either going to get Gaskin Lite best case or a completely wasted bench spot worst case. Follow The Lateral on Twitter (@TheLateralFF)