2020 Season: Inside The Week 9 Storylines 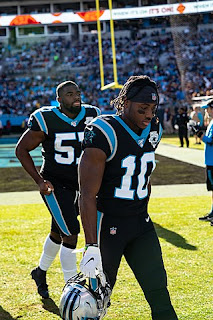 (Herms Music Recc: "The World Is Our ___. by This Will Destroy You)

That was a weird one, wasn't it? I'm sure we all had Chargers RB Kalen Ballage as a top 5 play this week, right? Playing this game is a true joy (or a complete and utter nightmare; depends on who you ask), and Week 9 of the NFL season had a lot of crazy stuff happen. In lieu of the weekly recap we have written historically here on The Lateral, we decided why not do something a little more helpful?

There are a million recap articles you can read from just as many sources, almost all of which are going to echo one another, and that's not what we try to do here. This is the place for a sideways look at fantasy football after all. I'm going to take a look at a few of the top stories from Sunday's action and dig into them to see what I can find. Being able to tell the difference between a fluke and a sign of things to come if more than half the battle in fantasy, so without further delay, let's take a look inside the Week 9 storylines.

Figured I'd start here with the player I mentioned earlier. To say that Ballage has been bad thus far in his brief NFL career would be putting it lightly. I mean, just take a look at career stats. His inefficiency last season (1.8 YPC) with the Miami Dolphins was downright laughable. But of course, we have to consider the ultimate underlying factor: he played in an offense coached by He Who Shall Not Be Named.

The current New York Jets head coach has crafted quite the reputation as a talent killer. This isn't big news to any hardcore fantasy enthusiast, but for the sake of this piece, just look at how good a pair of his former players are now that they're out of his clutches. Titans QB Ryan Tannehill has been doing quite well since he escaped, got his chance in Tennessee last year, and has carried that success over into this season. How about Panthers WR Robbie Anderson? I've talked about his success before and for good reason. He's had a very nice season here in 2020 as well. Is Ballage the next in line?

Not necessarily. Let's consider the context of his situation: he was picked up by the Los Angeles Chargers and placed on the team's practice squad on Oct. 9 after a brief stint with the Jets. The only reason he was even elevated to the Chargers active roster was due to the team already missing stud RB Austin Ekeler in addition to not having RB Troymaine Pope available as a result of a concussion. On top of that, had RB Justin Jackson not left the game basically right at the beginning with a knee injury, Ballage probably would not have seen the field much if at all. While it was somewhat surprising that HC Anthony Lynn went with him over rookie RB Joshua Kelley in that circumstance, I don't know that we should expect much juice to be squeezed out of this fruit; especially if Justin Jackson is healthy enough to go in Week 10.

Best advice: It will be tempting to add Ballage off the waiver wire, but I don't know that he needs very high priority. I will say, however, there is one important caveat: I think Ballage is pretty talented. He may not have done much to this point in his professional career, but take a look at his profile coming out of Arizona State in 2018 per FantasyPros' Mike Tagliere (a man I trust considerably). Ballage isn't a world-beater by any means, but the combination of his size and hands shows there could be some upside. If you're going to acquire Ballage, please do so if you are a.) not in immediate need of help, b.) play in a deeper league or a league with large roster sizes, and c.) not planning to make him a first priority from any waiver position/use anything over 10% of your FAAB budget.

This one is very exciting for me personally. I spoke briefly about how much I liked Samuel coming out of Ohio State and referenced his recent performances when recommending him as a waiver wire pickup. I made a deal for him in a dynasty league a while back but haven't quite had the stones to play him yet. I can imagine I'm not the only person in this situation, but after another stellar performance in Week 9 against Kansas City, it's time for a heat check. I know the long absence of RB Christian McCaffrey prior to yesterday sits prominently in the backdrop of Samuel's wonderful recent performances, but is it time to trust the Panthers WR?

With Week 9 set to conclude tonight, the stats haven't been input to FantasyPros yet, but from Weeks 5 through 8, Samuel comes in at WR26 in PPR scoring and I would imagine after the 26.8 point performance yesterday that he will only ascend from that spot. Despite only receiving 34 targets in that aforementioned span of time, he does have the highest catch rate on the team ahead of teammates Robbie Anderson and D.J. Moore, and that's not even including his 9 targets for 9 receptions from one day ago. In addition, Samuel has received 11 carries since Week 5 in some pretty creative ways, two of which resulted in touchdowns. Ultimately, I think it's pretty telling how much the Panthers want to get him the ball and his performance from Week 8 vs Atlanta definitely speaks to that notion.

Best advice: Well, going back to what I said about how McCaffrey being out may have caused some, including myself, to feel trepidatious in regard to Samuel to some degree or another, it appears the star running back may be sidelined once again with a shoulder issue. Plus Samuel did absolutely ball out yesterday even with McCaffrey in the game, so that point seems to be a moot one. Considering the next three matchups for Carolina being vs TB, vs DET and @ MIN before heading into their Week 13 bye, I think it might be a good idea to start including Curtis Samuel into your lineup as a firm WR3/flex option. Additionally, as of this moment, he is only rostered in 42.2% of ESPN leagues and 30% of Yahoo leagues. I would be inclined to roll with Samuel as my top wide receiver priority this week once again.

How About That Dolphins Defense?

The Miami DST entered Week 9 as the sixth-best on the year but faced an Arizona Cardinals team lead by QB Kyler Murray that caused some to be scared off. In fairness, some of that concern was warranted as the Cardinals did put up 31 points, but the Dolphins DST was good once again! The team sat pretty at the conclusion of Sunday's action with 8 fantasy points, good enough to be tied with the vaunted Baltimore Ravens. Not bad, right?

The tricky thing here is figuring out exactly how much we can take away from the team's success to date. They have faced a mixed bag of opponents in terms of degree of difficulty, but let's look at the facts: per Football Outsider's DVOA (Defensive-adjusted Value Over Average), the Miami Dolphins defense ranks 11th in the NFL and demonstrates a clear difference between their effectiveness as a pass defense in stark contrast to their subpar run defense. All in all, Dolphins HC Brian Flores has this unit outperforming expectations and the numbers back it up. The Dolphins are good.

Best Advice: Next week's game against the Los Angeles Chargers might not be all that appealing when considering the recent success of rookie QB Justin Herbert, but many of us felt the same way headed into this past week and look at where that got us? Also, keep in mind the Dolphins defense faces the Broncos, the Jets, and the Bengals over the following three weeks. This DST is rostered in only 20.9% of ESPN leagues and 32% of Yahoo leagues. Whether you're in immediate need of a defense or not, they warrant heavy consideration. I would act on this immediately.