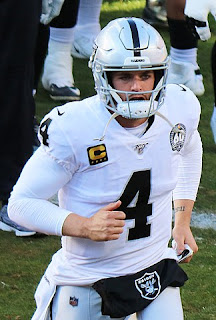 I've decided that moving forward I will be starting off my articles with a song or album recommendation to spice things up a bit and enhance the reading experience should you choose to listen while giving my work a browse.

The big slate of Sunday games for Week 8 is one measly sleep away. In order to help you get prepared, The Lateral is here to give you a rundown of whatever we feel you need to know to be prepared for Sunday. I am personally a big believer in going to sleep knowing that your lineup is set to the best of your ability so you can enjoy the Sunday games more rather than being left scrambling and making last minutes decisions, so that's the point of this weekly Saturday nightcap.

Injuries of note, solid match-ups to exploit, and last minute waiver moves are the name of the game here. As far as start/sit questions go, you can always tweet at myself (handle above) or my fine partner Malcolm McMillan (@McLateralFF) and we'll do our best to help ya out. And don't forget to look out for Malcolm's Sunday piece giving you whatever last minute news you need to know as well.

A lot to get to, so here we go: many people will be interested in one of either RB Gus Edwards or J.K. Dobbins should teammate Mark Ingram II not play against the Steelers. Give me Dobbins. I believe the Steelers are more likely to be beaten in open space out of the backfield than they are with a north-south guy like Edwards from what I've observed as a fan of the team. Either way you go, it's the Steelers defense and expectations for Dobbins would be in the RB3/flex range for me.

Higbee playing or not playing means little to me for fantasy purposes (hope he's well obviously) due to the awful matchup against Miami and should be on a bench regardless, so that's that. The Jets fantasy viable list of players is now down to only RB La'Mical Perine and should Gore not play I'd feel kind of okay playing Perine against Kansas City.

A not-super-helpful rundown of the big name RBs who should miss time and what their absences means: No Aaron Jones? Jamaal Williams Time! No Mixon? Giovani Bernard Time! No Sanders? Boston Scott Time! No Seahawks RBs basically? Deejay Dallas Time???
Okay, back to stuff. If you're missing or just want to bench Higbee like I mentioned before, see if Browns TE Harrison Bryant is available to you. Boom! Look at that. I'm a problem solver. As far as the Patriots go, I'm really feeling RB James White with all the injuries and no one for QB Cam Newton to throw to basically. Speaking of running backs who play in the NFL, RB Tevin Coleman returning to action throws some water on my JaMycal Hasty fire but I'd still play him as a flex. Coleman himself isn't someone I want to trust in his first action since being activated off of IR but hey, stash him on the bench maybe? Let's see what the man can do. This also makes me not want to even touch RB Jerick McKinnon by the way.

Saints wide receivers are hurt but what else is new?

For these, I'll be taking a look at their rostership % on ESPN:
QUARTERBACK:
RUNNING BACK:
WIDE RECEIVER:
TIGHT END: