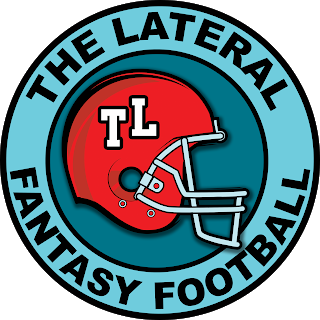 Malcolm McMillan (@McLateralFF)
The Lateral Writer
No need for a long intro on this glorious playoff Sunday. Hopefully, you are still alive in your leagues if you are reading this, but if not I appreciate you still giving our content a look! Go check out our appearance on the Bacon Games Podcast this week if you have not already, and go read this week's Heat Check and Movers and Shakers for more in depth #analysis.

QB Matthew Stafford (DET): Stafford (QUESTIONABLE, Thumb) is expected to play. He is also expected to remain unpredictable in terms of fantasy production. Start at your own risk.
QB Drew Brees (NO): Brees (OUT, Ribs) is not going to be rushed back for a key matchup next week against the Chiefs. Keep/snag Saints QB Taysom Hill, as Kansas City is exploitable on the ground by QBs. It is a matchup that plays to Hill's strengths.
RB Kenyan Drake (ARI): Drake (QUESTIONABLE, Hip) is expected to play this week against the Giants. I mentioned on the Bacon Games Podcast this week, Drake is a solid play, though Chase Edmonds may end the day as the leading Cardinals RB in terms of fantasy points.
RB Christian McCaffrey (CAR): CMC is OUT this week (Quad), but hopes to play again this season. Translation: make sure you do not drop Panthers RB Mike Davis. Obviously, you keep McCaffrey as well, but I am no longer expecting him to play again this season.
RB Ezekiel Elliott (DAL): Zeke (QUESTIONABLE, Calf) is expected to play against the Bengals. The matchup is good enough that you probably roll him out, even if his performance has been largely worthless in recent weeks.
RB D'Andre Swift (DET): Swift (QUESTIONABLE, Illness [non-COVID]) is expected to play, greatly hurting those fantasy managers relying on a third week of production from Lions RB Adrian Peterson. Given the pace of Swift's recovery though, I would not be shocked if the Lions RBBC resumes and both Swift and Peterson finish fantasy relevant. you can still probably FLEX both, but I am hesitant about Peterson.
RB Josh Jacobs (LV): Jacobs (QUESTIONABLE, Ankle) is expected to play and is near full-strength according to Ian Rapoport. He starts and Raiders RB Devontae Booker sits as far as fantasy is concerned.
RB Frank Gore (NYJ): Gore (QUESTIONABLE, Concussion) is a game-time decision but leaning towards playing this week. Keep Jets RB Ty Johnson locked and loaded in case Gore sits this one out.
WR Tee Higgins (CIN): Higgins (QUESTIONABLE, Hamstring) is expected to play, and as much of a mess as the Bengals offense is, Higgins is probably still startable against the Cowboys. You can certainly slot him into your FLEX if needed.
WR Brandin Cooks (HOU): Cooks (QUESTIONABLE, Foot/Neck) is unlikely to play this week, making Texans WRs Keke Coutee and Chad Hansen viable plays in fantasy. Check out the Bacon Games Podcast, Heat Check, and Movers and Shakers from earlier in the week for more, but Coutee is now the WR1 and Hansen saw most of Cooks' work when he was out with a potential concussion. They play a Bears defense that gave up 400 passing yards last week.
TE Kyle Rudolph (MIN): Rudolph (QUESTIONABLE, Foot) is not expected to play against Tampa Bay. Vikings TE Irv Smith Jr. is now worthy of a dart throw in a solid matchup with little competition.
Top Waiver Players Available

There has not been much movement on the waiver wire, so go check out Movers and Shakers from yesterday for our latest waiver recommendations. The only players that were not covered that come to mind were Dolphins RB DeAndre Washington, who will get the start in Miami for at least this week with Myles Gaskin out with a positive COVID-19 test, and Falcons WR Russell Gage who will become the WR2 in Atlanta with Julio Jones out with a hamstring injury. Both have the potential to see a lot of work, and possibly not just in Week 14, but they have failed to rise to the occasion before. Washington was unable to do much on the Kansas City Chiefs roster earlier this year, so jokes about a revenge game aside, he is not a guarantee to do much in the starting role with a nagging hamstring injury. Gage has been a bit more viable this year, with nearly 9.5 PPR PPG as the WR3 in Atlanta. However, the previous three times this season when Julio was out Gage averaged less than five PPR points.
If you want, you could stash either player and see if they play well. If they do, you may have a bullet already in the chamber for Week 15 and have prevented an opponent from getting an edge on you. But I would not start either player this week with your championship hopes on the line.
Follow The Lateral on Twitter (@TheLateralFF)
2020 Season ESPN Free Agents Injuries Injury Report Malcolm McMillan Sunday Preview The Lateral Waiver Wire Waivers Week 14 Yahoo Fantasy