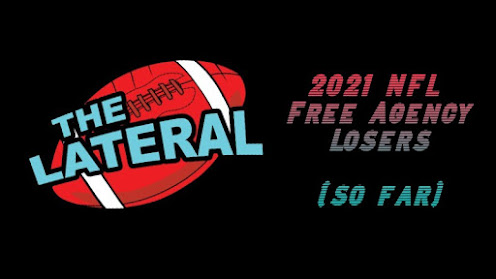 Malcolm McMillan (@McLateralFF)
The Lateral Editor
NFL Free Agency has come and... is still coming?
Yes, free agency is still very much ongoing and teams are still building their rosters. They also still have many talented players to choose from (particularly on defense). However, when the biggest story on a given day is RB Mike Davis signing with the Atlanta Falcons, it is safe to say that the silly season is slowing down.
So with the risk of Super Bowl champion WR Antonio Brown ruining this article when he signs with someone other than the Buccaneers, let's get into the good stuff... free agency losers!
These players are losers from a fantasy standpoint. If you are AJ Dillon, not having to put on a ton of mileage during your rookie deal is arguably a win, especially if you still get an upgraded role from the 2020 season. But from a fantasy perspective, the re-signing of Aaron Jones would definitely cap your fantasy value for 2021 and counts as a significant loss.
Finally, expectations were definitely taken into account when selecting these players. For example, RB James Robinson (JAX) was always expected to have some new teammates in Jacksonville's RB room. Jacksonville adding RB Carlos Hyde did not change my expectation that James Robinson will be an RB2 in 2021, so he did not make the list.
2021 NFL Free Agency Losers (So Far)