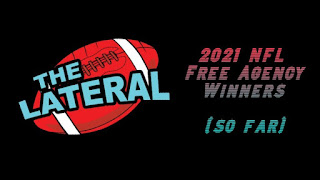 It does not make a lot of sense to write a free agency losers article without then following up with a winners piece in response. Come to think of it, the rule of thumb for such a thing would be to start with "winners" and then talk about "losers", but rules are stupid and completely made up anyway. So here we are, 2021 NFL free agency winners!

Well, at least as of this moment. There is still a small handful of players who have a chance to make an impact in redraft available on the free agent market. Until we see some of the veteran RBs and WRs find new homes this will be an incomplete exercise, but that said, enough of the bigger name players are off the board.

Last thing to keep in mind is that this is all relative to fantasy football and not actual NFL football. Steelers WR JuJu Smith-Schuster likely would have benefitted from moving on from Pittsburgh, but for reasons soon to be explained, he is included in the winners. Additionally, it is not like Washington Football Team fans should lose their minds over the arrival of QB Ryan Fitzpatrick (oh, sorry; I meant Fitzmagic), but for our purposes it is a massive deal. This should all make sense especially considering the entire purpose behind this site is fantasy football but hey, we cannot assume anything ever at any time. Let's get it cookin', good-lookin'.

Okay, you get the point. One of the hardest things to do when analyzing new information and putting together rankings every year is how to project forward for a player entering a new situation. Sure, sometimes it is easier to do for guys like brand new Giants WR Kenny Golladay who will clearly be the WR1 in that offense, but it is not always cut-and-dried nor do things assuredly pan out as expected even when it looks good on paper (lookin' at you, RB Jordan Howard last year with Miami).

It is hard to put a price on continuity for redraft leagues, but should we make an attempt, said price feels about as good as landing two top 5 RBs on the same squad. While it may not be super thrilling from a narrative standpoint to see the same faces in the same places, it does make our lives easier when trying to figure out how we feel about these guys headed into the 2021 NFL season. There is certainly a fine argument to be made for some of these players being losers relative to what their potential fantasy outcome(s) could have been had they gone elsewhere, but familiarity is a nice thing, is it not?

As was alluded to in the winners edition, Robinson's value for 2021 was set to take somewhat of a hit the entire time. When considering the obscene workload share he carried for the Jaguars last season, it was no question that the team would address putting someone behind Robinson to ease that workload. It was never so much a matter of will another back come into the fold in Jacksonville but rather who? Fortunately for those who root for the success of the 2020 UDFA, the answer to that question of who is RB Carlos Hyde.

In fairness, Hyde is a professional athlete and therefore deserves respect and praise, but if we look at his statistics in recent years, is this someone you fear will dramatically wreck the fantasy scoring floor for James Robinson? It is the belief of this author that a short "no" is sufficient and that at least for 2021, Robinson can be viewed as a reliable RB2. His dynasty value is a different story but for redraft? No concerns. We really dodged a bullet with this one.

Before we go any further, the answer is no. This is not about to be a thing where we find ourselves falling into the trap of calling a player who has shown sparse flashes of being great sprinkled over a resumé of being largely ineffective/at times comically bad "primed for a breakout"; that is not happening here (see: 2020 Broncos QB Drew Lock hype). That said, the aforementioned acquisition of WR Kenny Golladay gives Jones something he has never had in his career to date: a true #1 option in the passing game. It will be interesting to see what happens with the NFL Draft before any additional expansion on this take is warranted, but sometimes it is important to state the obvious. Daniel Jones should theoretically be a clear winner as a result of Golladay's presence alone.

Say what you will about the DGAF, gun-slingin' nature of his game, but there is a reason why QB Ryan Fitzpatrick has been arguably the most beloved journeyman in the history of the league. The actual NFL statistics and the fantasy numbers are not eye-popping due to the fact that it's been a while (sorry, I had to) since he's been the starter for the majority of a season aside from 2019, but it does not take a math genius to extrapolate his year-to-year numbers over a 16-game stretch and realize "oh, damn, this dude is good for fantasy,"

Not only is Fitzpatrick himself a viable QB for fantasy football, but he's been pretty dang useful for his WRs as well. What do 2019 DeVante Parker (WR11 in PPR), 2015 WR Brandon Marshall (WR3 in PPR), 2010 WR Steve Johnson (WR10 in PPR) among others all have in common? Ryan Fitzmagic as their QB. There are people more articulate that can expand upon this point further with greater detail and context, but it is pretty apparent why many others including The Lateral staff are stoked for WR Terry McLaurin headed into 2021. It is tough to imagine a scenario barring injury where Fitzpatrick starts more than 10-12 games and McLaurin does not finish as a WR1 in 2021.

Oh, and did you forget that WR Curtis Samuel is comin' to town? Regardless of what these moves mean for actual football is a whole other discussion, but in terms of the 2021 outlook for redraft, the Washington Football Team is going to be a team this author targets the players from heavily come draft season.

There will be plenty more to say as time goes along and we find ourselves post-NFL Draft determining if players like Cardinals RB Chase Edmonds is a winner or not, but as it stands, that's all for now. Thanks for reading.