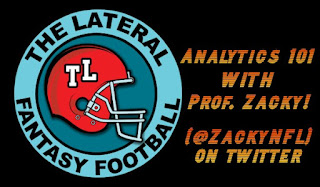 Zach Crutcher (@ZackyNFL)
The Lateral Contributor
In this series from The Lateral, our friend and math teacher extraordinaire Zacky breaks down some key analytics and what they all mean in order to help you win your fantasy football league. This week, we bring to you Yards Per Team Passing Attempt:

Productive players are the pillars of any successful team. When drafting each year, you can put yourself at a significant advantage compared to your leaguemates by being able to correctly identify which players have the potential to achieve elite production. There are many ways to go about measuring this, but one of the most predictive statistics for rookie year production is Receiving Yards per Team Passing Attempt, commonly referred to as YTMpA for short. It's a very straightforward metric used to measure a receiver's production relative to the number of passing attempts thrown by their team.

In the NFL, anything above 2.0 is really good, and pushing the 2.5 yards per team passing attempt threshold means you had an incredible season. Atlanta Falcon's budding star Calvin Ridley had 1,374 receiving yards on 628 team passing attempts this season, good for a YTMpA of 2.19. Stefon Diggs of the Buffalo Bills posted a career high (and league leading!) 1,535 receiving yards and with Buffalo throwing 596 passes on the season, Diggs had a YTMpA of 2.58. That level of sustained production throughout the season was a huge reason why both Diggs and Ridley were on so many championship winning rosters. If you can find out which players have the potential to be the Diggs and Ridley of next season, you can significantly improve your odds of winning the trophy yourself. Calculating a wide receiver's YTMpA is as straightforward as it sounds, and can be done using the formula below.

One player who tends to fly under the radar despite being incredibly consistent year over year is Brandin Cooks of the Houston Texans. Cooks just finished up his 7th season in the NFL and impressively has reached at least 1,000 receiving yards in five of his last six seasons for multiple different franchises. His consistent production can be a value in later rounds of drafts, regardless of format, Cooks is a viable weekly flex play or better. In the 2020 season, Cooks caught 81 passes for 1,150 receiving yards. The Houston Texans threw 546 total passes that season. Assuming Brandin Cooks can stay healthy and avoid any further injuries, particularly concussions, he is a player worth targeting in all formats due to his low cost and high upside.

Players with a high YTMpA in college have shown that they are capable of creating solid production within their offense's scheme and volume of passing. When you have a player like Brandon Aiyuk who totaled 1,192 receiving yards for Arizona State in 2019 with quarterbacks Jayden Daniels and Joey Yellen throwing a combined total of 382 passes, there is a good chance that he is talented enough to make a smooth transition to the NFL. It's also a huge boon to be able to find diamonds in the rough like Tee Higgins, currently one of the most desirable wide receivers in Dynasty fantasy football. Higgins' final stat line for Clemson in 2019 was an impressive 59 catches, 1167 yards, and 13 touchdowns. Those were good for 2.3 yards per team passing attempt, 27% market share, and a 29.7% dominator rating. Clemson went 14-1 in 2019 with their only loss coming at the hands of Joe Burrow and LSU in the College Football Championship. The Clemson Tigers were dominant all season long, averaging 48.8 points in the victories while allowing just 12.4 points to be scored against them. With 11 of their 14 victories by margins greater than 30 points, Clemson was able to take their foot off the gas and rest players in the second half of games at times. This is where things get crazy.

As previously mentioned, Tee Higgins had 59 receptions, 1167 receiving yards, and 13 touchdowns. Of those, only 11 catches, 169 yards, and 2 touchdowns came in the second half of any games that he played. To put into context for how absurd that is, Higgins accounted for 81.3%, 85.5%, and 84.6% of his seasons' receptions, yards, and touchdowns, respectively, in the first half alone. It is no surprise that Higgins was so productive at the NFL and looks like a future star. Regardless of format, Higgins is worth targeting in every league.

We can take a look at the YTMpA of some recent rookie classes and see how it compares to their rookie year production or current standing in the NFL. Some of the players that immediately stand out, hindsight be damned, are AJ Brown, Marquise Brown and Andy Isabella from the 2019 class. Laviska Shenault Jr. and Darnell Mooney from the 2020 class, and Rashod Bateman, Devonta Smith, and Elijah Moore from the incoming class of 2021 rookies. Andy Isabella had a great analytical profile and was selected with the 62nd overall pick by the Arizona Cardinals in 2019. Despite his impressive production in college, Isabella has not found much success at the NFL level. 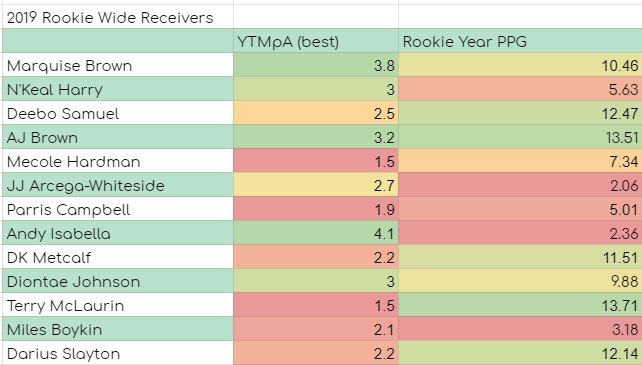 AJ Brown is looking like one of the most dominant wide receivers in the NFL today, and he will almost certainly find himself with a top 5 ADP at his position when teams start drafting as the season grows nearer. Brown had a 3.2 YTMpA in college for Ole Miss before bursting onto the scene as a rookie in the Titans play action-centric offense with 216.1 points in 16 games, good for 13.5 PPG in a full point per reception (PPR) format.

The Titans made it to the AFC Championship game in 2019 before falling short to eventual super bowl winners, Kansas City. AJ Brown followed up his exciting rookie campaign with 17.54 PPG in the 2020 season, totaling 245.4 fantasy points over 14 games. Marquise Brown may not have lit the world up yet, but he has solid college production, has shown he can succeed at the NFL level, and caught a touchdown in 5 of Baltimore's final 6 regular season games - a promising sign. If Marquise can continue to improve upon his stat lines and the Baltimore passing offense opens up, he can jump a tier or two in the wide receiver rankings. 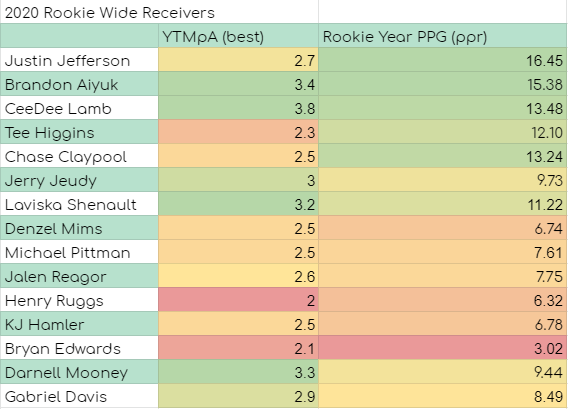 We all just saw how effective Brandon Aiyuk was during his rookie season in San Francisco. It was impossible to miss just how incredible Justin Jefferson's record-breaking rookie season was as well. There are two other players who are flying under the radar from such an incredibly talented receiving class, and they are Laviska Shenault Jr. and Darnell Mooney. Both players posted a YTMpA greater than 3.0 in college and both were able to exceed an average of 9 points per game as rookies, despite being on teams with poor offenses and even poorer quarterback situations. With Trevor Lawrence on his way to Jacksonville and the Bears looking to upgrade at quarterback, the future is bright for both Shenault Jr. and Mooney. They will be relatively cheap compared to some of their similarly successful peers with a massive opportunity to outperform their cost.

In the 2021 class, Rashod Bateman, DeVonta Smith, and Elijah Moore really stand out in terms of YTMpA. All 3 players are electric on the field and capable of being YAC monsters in the NFL. Bateman is an extremely well rounded prospect with very few flaws in his game, Smith just had one of the most dominant seasons for a wide receiver in recent memory, and Elijah Moore has a phenomenal analytical profile boosted by excellent performances at the Ole Miss pro day on March 25th. Moore ran a 4.35 second 40-yard dash, a 6.66 second 3-cone drill, and is a likely day 2 pick with the potential to sneak into the late first round. Elijah could find himself with a great opportunity to produce right away on a strong team.

What do you think we can reasonably expect from the incoming rookies on a points per game basis? Do you have a favorite incoming rookie that can shake up the scene? Leave a comment below.