How to Draft the Perfect Team: Part I (The Hypothesis) 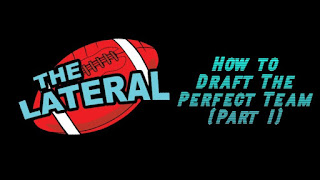 Malcolm McMillan (@McLateralFF)
The Lateral Editor
How to Draft the Perfect Team
Part I: The Hypothesis
Drafting is obviously important when building a championship roster. Yes, you need to still use FAAB or waiver claims and make trades to fix mistakes or capitalize on new trends, but you cannot rely only on add/drops and trades. That is like deciding to run a marathon with a 20 lb weight around your neck. If you are really good, maybe you will win, but it is much more likely that someone else is going to win that race.
Would it not be great then, if there was a way to map out the perfect draft? Or at least get really close? What if instead of being the person who took Le'Veon Bell at ADP RB18 you were the person who Melvin Gordon two spots later? Could you reasonably have reached that conclusion in the first place? Quite possibly! With only a two-spot difference in ADP, there is certainly evidence that people rated the two RBs similarly.
What about the less logical choices though? In hindsight, you would have loved to have locked up future RB4 James Robinson in round 13 instead of his teammate RB Ryquell Armstead. But would you have logically ever done that? Would you have reached five rounds to snag an undrafted free agent that was going at ADP 222 overall? If we are being honest, the answer is probably no. You were much more likely to snag Robinson as a waiver add in the preseason or after Week 1.
This gets at the core of the issue: can you logically draft perfectly, or because of unpredictable variables, is it simply impossible to reasonably draft a championship roster? That is the question we will be trying to answer over the next several articles.
The Scientific Method
For those of you who do not remember high school biology anymore, the scientific method looks something like this:
Below is how I will apply the scientific method to attempt to create the perfect draft:
Develop a Research Question
The research question is: Is it possible to draft a championship roster using logic?
Formulate a Hypothesis
My hypothesis is that it is possible to create a championship roster using available data and logic rather than solely on hindsight.
Design an Experiement
Below are the parameters for this experiment to create a championship roster:
Perform the Experiment
To perform the experiment:
Conclude if the Hypothesis Was Proven
The hypothesis will be considered proven if the drafted team is determined to have won enough games to make the playoffs, advance to the championship game, and then subsequently win the championship.
Report the Results
Results will be reported over the coming parts of this multi-part series. This will likely consist of multiple parts for both the drafting process and the in-season performance analysis in the interest of producing easily consumable content while still being thorough.
Important Caveats
Here are some caveats that are important to keep in mind:
Follow The Lateral on Twitter (@TheLateralFF)