on August 24, 2021
Can You Digg It? A case for Stefon Diggs as the WR1 in 2021.
Zach Crutcher (@ZackyNFL)
The Lateral Contributor
With Aaron Rodgers now staying in Green Bay we have a clearer picture of the 2021 season. Especially regarding the three contenders for 2021's fantasy WR1. All three are elite WRs with superstar QBs, and they were the three highest-scoring WRs last season. In 2020, Green Bay WR Davante Adams finished atop the leaderboard, followed by Kansas City WR Tyreek Hill in second and Buffalo's newly acquired WR Stefon Diggs in third. It may be easy to expect Davante Adams to repeat his performance as the WR1 overall, but only four players have accomplished this feat in the past twenty seasons. In PPR formats, the only players to record back-to-back WR1 overall seasons from 2001-2020 were: Marvin Harrison (2001-2002), Andre Johnson (2008-2009), Calvin Johnson (2011-2012), and Antonio Brown (who did it four years in a row from 2014-2017). So if we assume this historical trend matters, one name that stands out is Stefon Diggs, who looks poised to soar even higher in 2021.

Let's start with some context on Diggs' 2020 season. Despite his ultimate success, the buzz going into the season was largely negative. A popular theory in fantasy is that WRs seem to struggle in their first year on a new team. Learning a new system while developing chemistry with a new QB can be difficult for even the best WR, and this theory became a common critique of Diggs going into his first season in Buffalo with a still "raw" Josh Allen at QB. Brandon Gdula of numberFire even has an excellent article detailing exactly how elite WRs struggle when switching teams. "Half of the receivers we still believe in enough to take inside the top-16 at the position have fallen at least two points shy in their PPR-point-per-game average in that first year with the new team."
So it was a shock when in 2020, Diggs beat the odds of regressing in year one on a new team. In 2019, Diggs scored 212.1 PPR points in 15 games, good for 14.1 PPR PPG, but in 2020 Diggs exploded for 328.6 PPR points in 16 games (20.5 PPG). He also contributed towards a substantial improvement in Bills QB Josh Allen, as Allen put up an MVP-caliber season of 4,544 passing yards, 37 passing touchdowns, and a career-best completion percentage in 2020.
The pro-case for Diggs strengthens as you examine how Diggs performed as he grew more comfortable with Allen. Remember, that the main criticism of Diggs was that WRs on new teams struggle due to a lack of chemistry with their new QB, and chemistry should build as the season moves on. So, theoretically, Diggs should have improved as the season progressed.
Turns out, that theory is correct! In the first eight games of 2020, Diggs averaged 17.7 PPR PPG, clocking in at WR6 overall. But in Weeks 9-17, he averaged an incredible 23.4 PPR PPG, the overall WR2 behind Davante Adams. 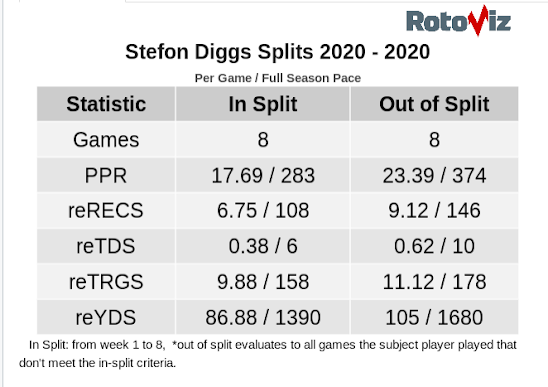 In 2020 Diggs led the entire league in targets, receptions, and receiving yards. His 166 targets were six ahead of DeAndre Hopkins, who was the next closest, and his 127 receptions outpaced Hopkins by 12. Diggs's 1,535 receiving yards were 119 yards more than even Travis Kelce could muster. The only thing that Diggs was missing in 2020 was touchdowns, as he found the end zone only eight times in 16 games. In comparison, Davante Adams scored 18 touchdowns in 14 games, and Tyreek Hill averaged one touchdown per game with 15 touchdowns in 15 games. With the chemistry between Diggs and Allen increasing with every pass and Buffalo's commitment to a modern pass-heavy offense, it is highly logical that Diggs scores more than a mere eight touchdowns in 2021.
Not only is it logical, but there is even evidence to support touchdown progression! As previously mentioned, Josh Allen threw for over 4,500 passing yards and scored 37 times through the air. Only eight of those 37 touchdowns went to Diggs despite his 29.02% target share overall, and 20.8% target share in the red zone. In fact, there were several Bills who found the end-zone despite their seemingly insignificant role in the offense. Five touchdowns went to backup, blocking-tight-ends Tyler Kroft (three) and Lee Smith (two). Another five touchdowns went to Isaiah McKenzie, including some jet motion or jet sweeps designed to catch opposing defenses sleeping. Kroft, Smith, and McKenzie combining for 10 touchdowns on only 56 targets is a feat they are unlikely to repeat in 2021 (even if Kroft was still in Buffalo). But even if the outliers in the Bills' offense still continue to score in 2021, Josh Allen throwing for more touchdowns in 2021 is a real possibility. Last season Allen threw for a touchdown on "only" 6.5% of his passes. A season in which Allen approaches an 8% TD rate would have a huge impact on Buffalo's pass catchers, and if he exceeds this and can approach a truly elite 9.1% mark like Aaron Rodgers in 2020 or 9% like Lamar Jackson in 2019, the Bills' high-octane offense will erupt.

Diggs's ceiling should also benefit from the departure of John Brown. Diggs had success as a deep threat with the Vikings, so he is already suited to have a larger role in the deeper areas of the field this coming season. Being a deep threat is a great way for receivers to rack up the long touchdowns and high receiving yard games that are needed to finish as the fantasy WR1.
An elite talent like Diggs with high volume and elite efficiency has the potential to lap the field if he heats up in the deeper areas of the field. In 2020 (per RotoViz Stat Explorer) on throws of 15+ yards, Diggs had 20 receptions on 40 targets for 479 receiving yards. In his more vertical role for the 2019 Vikings, Diggs caught 17 such passes on 30 targets for a massive 657 receiving yards. If Josh Allen can continue his tremendous growth as a quarterback, Diggs could see a return to better efficiency in the deeper areas of the field as well as a more consistent role.
Finally, Stefon Diggs is a highly efficient player. Using the RotoViz Stat Explorer we can see that Diggs has finished inside the top-10 in terms of fantasy points over expectation three times in his five-year career. He has also ranked inside the top ten two separate times in terms of raw expected points, notably finishing first overall in 2020 as well.

In summary, the case for an even higher ceiling for Stefon Diggs in 2021 is pretty straightforward. We have seen Diggs succeed in all areas of the field, both before the catch and after the catch, and he also excels with elite volume. Diggs currently has a FantasyPros ADP of 14, WR3 overall, despite being a better bet to score 300 or more PPR points than many of the running backs going ahead of him, and arguably even the wide receivers as well. With is a clear path to 22+ PPR PPG, I currently have Stefon Diggs as my 5th best player overall in PPR formats. Even if he were to fall short of the WR1 overall, he is well-deserving of being selected in the first round.
Follow The Lateral on Twitter (@TheLateralFF)
2021 Season August 2021 Buffalo Bills Player Profiles PPR Preseason Stefon Diggs Wide Receiver WR Zach Crutcher