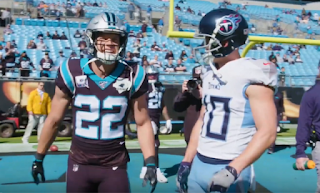 You can take a deep breath folks. The horrible, terrible, awful bye-pocalypse is now behind us. It wasn't pretty. We found ourselves starting players like Denzel Mims and Byron Pringle. We fought and clawed on the waiver wire just to fill our lineups. It became less about points and more about finding anyone who wasn't injured. We also learned a lot about our fantasy teams and some of these "dart throw" players we had to insert. Now seven weeks into the season, things are starting to become a bit more clear around the league.

Are Chiefs In Trouble?

I certainly didn't think this would be a takeaway I had at any point during this season, yet here we are. Kansas City headed into Week 7 at 3-3, with most expecting them to easily handle a mediocre Tennessee Titans team despite their woeful defense. Oh boy were we all wrong.

For all intents and purposes, this game was over in the first quarter. Tennessee jumped out to a 14-0 lead quickly, eventually ending the first half of play with a 27-0 advantage. Patrick Mahomes looked frazzled and panicked before exiting the game in the 4th quarter with an apparent head/neck injury. Tyreek Hill was a non-factor, as was Travis Kelce. Byron Pringle was the team’s leading receiver and Mahomes the leading rusher on their way to a 27-3 loss, dropping them to 3-4 and tied for last in the AFC West with an abysmal Denver Broncos squad. Oof.

Is there reason to panic? Sure. It's concerning that the most potent offense in football is no longer. If what we saw against Tennessee is any indication of future performance, anyone rostering the "big 3" in Mahomes, Kelce and Tyreek Hill could be in for a shock when they aren't performing up to their draft stock. Realistically, however, this won't continue.

Mahomes is still QB5 on the season, Kelce the TE1 and Tyreek Hill the WR2. While as a team they have been subpar, for the most part they are living up to their fantasy expectations. You shouldn't expect that to change. This week they face a mediocre New York Giants defense that is giving up an average of 22.5 points to the QB position and 32.6 points to wide receivers. If they drop another stinker next week, it might be time to worry. But for now, reserve the panic for elsewhere.

Just to be clear, in no way am I saying I think Khalil Herbert is now the RB1 in Chicago or will in any way impact David Montgomery's value in fantasy when he returns from IR, hopefully no later than Week 11 when Chicago faces the Baltimore Ravens. What I am saying is this: Until Montgomery returns, Khalil Herbert will get the bulk of the carries on a team that needs to rely heavily on the run game. Justin Fields is struggling mightily. Herbert has been reliable the last two weeks, scoring 19.2 fantasy points against Green Bay and 18.3 fantasy points against Tampa Bay, two very good run defenses. He even got involved in the passing attack against the Bucs where he caught all five of his targets for 33 yards.

Damien Williams was a non-factor in his return from the COVID-19/Reserve List. That will be the case moving forward. But what about when Montgomery returns? Of course, Herbert won't continue to see the rushing volume when he's back in the lineup. He should, however, become a reliable receiving target for Fields. He has one fewer target than Montgomery on the season in two fewer contests. QB Justin Fields is in need of receivers that can help him get the ball out of his hands quickly. Herbert fits that bill perfectly. What was an emergency grab in most leagues due to injuries has become a player you just might find could have solid value the rest of this season and beyond.

The Panthers Offense Is, Like, Really Bad Without Christian McCaffrey

Carolina had an amazing start to the season, albeit against some fairly weak opponents in the Jets, Saints and Texans. Sam Darnold looked like a new man, at one point leading the league in rushing touchdowns with five. D.J. Moore was the threat we all knew he could be, racking up fantasy point totals of 15.4, 21.9 and 21.5. There was hope after McCaffrey went down in Week 3 against the Houston Texans. Week 4 saw them run with a very good Dallas team, almost mounting a 4th quarter comeback for a 4th straight win. And then, it all fell apart.

Since the failed comeback against the Cowboys, Sam Darnold has averaged 9.2 fantasy points per game. He has thrown more interceptions (5) than touchdowns (2), hasn't managed to throw for more than 207 yards, and has an abysmal 52.4 completion percentage. D.J. Moore is averaging 10.67 in that same span while only catching 53.3% of his targets. The only bright spot has been running back Chuba Hubbard, who is doing his best to fill the role vacated by McCaffrey. Since taking over in the backfield, he has scored 18.4, 13.5 and 9.6 fantasy points respectively.

Let's cut to the chase. Without Christian McCaffrey, Sam Darnold is not startable in most fantasy formats. D.J. Moore is someone you can roll out understanding his ceiling is a lot lower now than it was the first four weeks. Chuba Hubbard will continue to see volume and is a safe play with a safe floor. We can only hope that McCaffrey returns this season healthy and ready to go. Without him, this offense is one of the worst in the league.

Heyo! Thanks for reading along for my Week 7 takeaways. You can find me and more of my work on Twitter @JeNateJackFF. Got questions? Shoot me an email at natepolvogt@gmail.com. See you next week!
Follow The Lateral on Twitter (@TheLateralFF)