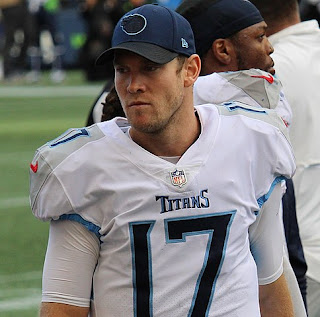 Well, hey there! How is everyone feeling after Week 11? It was another slate full of pure insanity. The Tennessee Titans were shut down by the Houston Texans, and with that A.J. Brown and Ryan Tannehill. The Buffalo Bills are reeling, as are any fantasy managers who have any of their players rostered. Jalen Hurts continues to do Jalen Hurts things in Philadelphia while Miles Sanders continues to be frustratingly underutilized. Jonathan Taylor went off in historic fashion, Austin Ekeler crushed on Sunday night, Aaron Rodgers returned to form and showed why he is one of the best in the business, and Russell Wilson made us all wonder if he is tanking the season.

This 2021 season has been a wild ride and that's showing zero signs of changing. As a fantasy manager, that is endlessly infuriating. All we can do at this point is look at the whole picture and make our best guesses as to what each week will bring. The answer, it seems, is going to be chaos. What do I make of all this? Here are my three biggest takeaways from this past week of football.

Darnell Mooney Is The Truth

I have been on the Darnell Mooney train since last season. He showed flashes in 2020, especially towards the end of the season, giving us all high hopes for 2021. It didn't start great, with Mooney averaging 10.1 point per reception (PPR) fantasy points through his first 8 games, making him the overall WR43 in that span. That's not exactly what you would call a breakout.

To be fair, the Chicago Bears have been mostly a joke this season. As a team, they are only averaging 172.4 passing yards per game; not the kind of number you want to see when you're expecting a young wide receiver to thrive. Coupled with him technically being the WR2 in Chicago behind Allen Robinson, Mooney being the WR43 could be seen as somewhat impressive and encouraging. What's even more encouraging is what he has done the last two weeks.

In a Week 9 loss in Pittsburgh, Mooney saw six targets that he turned into three catches for 41 yards and a touchdown. In a show of versatility, he also added a rushing touchdown on a nice 15-yard carry. After a Week 10 bye and in the absence of Allen Robinson, Mooney exploded. He saw a season-high in targets (16) and yards per catch (24.2). He only managed to catch five of those targets, but that can mostly be chalked up to poor quarterback play, a problem that has plagued this entire offense the last two-plus seasons.

Yes, Chicago is still bad and it's not looking like that is going to change this season. Justin Fields is hurt with no indication of the severity of his injury at this time, leaving Andy Dalton at the helm. Allen Robinson will return, most likely eating into his target share, as we've seen when Robinson and Mooney are both on the field. However, what Mooney has done this season, especially the last two weeks, is undeniably impressive. I expect him to continue to grow and see an increased involvement here the rest of the season. He could just be the perfect fit heading into the fantasy playoffs.

Derek Carr Is Not The Truth

Oh, how the "mighty" have fallen. We've seen it all over the league this season. Disappointment has been aplenty in 2021. Patrick Mahomes II, Miles Sanders, and the entirety of the aforementioned Chicago Bears, outside of David Montgomery, come to mind. I think we can now safely include Raiders quarterback Derek Carr in this list. What was supposed to be a breakout season for him has been anything but.

Things started out hot for Carr and his Las Vegas teammates. The team came out of the gates and went 3-0 with Carr averaging 22.8 fantasy points, making him the overall QB9 to start the season. Impressive to say the least. Vegas looked to be in the conversation as an elite AFC team. Since Week 4 however, it's been apparent this is a team in flux, with more questions than answers.

Since the stellar start to the season, the Raiders are 2-5 and Carr is the overall QB17, averaging only 14.63 fantasy points per game. Yes, he has 10 touchdowns in that span, but he also has 7 interceptions. While he is completing roughly 73 percent of his passes, it's mostly been short to intermediate tosses for minimal yardage. Because of this, players we all expected to excel this season (think Bryan Edwards, Darren Waller) have been severely limited this far. This offense simply isn't pushing the ball down the field.

To be very clear, this organization is a mess. Between the Jon Gruden fiasco and the Henry Ruggs III nightmare, it's hard to imagine any of this changing in 2021. A rebuild is in order and this team knows it. The talent is there with Carr, that's not even a question. The issue is within the walls of the Raiders locker room, and until they fix that issue, don't expect anything big from Derek or anyone else on this team.

The Truth Is, We Know Nothing

Folks, as much as we try, we cannot see the future. Analyzing sports is a very difficult task. There are so many variables and "what ifs" we could never possibly know the answer to. Yet every week during the season, and many during the offseason, here we are, trying to make sense of the madness. We project what we can with the information given and make educated guesses.

This 2021 campaign has been insanity. A New England Patriots squad that was assumed to be in rebuild mode is now in contention for the AFC East. The AFC West is the tightest division in football, with no team being more than 1.5 games out of the lead. The Dallas Cowboys, who started the season looking bullet-proof, have now lost two of their last three, and the Buffalo Bills look like a mess. The Kliff Kingsbury-led Arizona Cardinals, on the other hand, have managed to win three consecutive games with backup Colt McCoy stepping in for the injured Kyler Murray. None of what is happening right now makes sense.

There is a multitude of reasons this has been one of the craziest seasons in recent memory. Not only are we smack dab in the middle of a global pandemic, but we also have a changing of the guard among starting quarterbacks and a shift in philosophy amongst NFL offenses. We've never seen such an emphasis on mobile quarterbacks. More teams than ever are applying the running-back-by-committee approach. The league as a whole is getting younger. It's a wholesale shift in thinking almost league-wide. It's forced anyone playing this game to think more on their feet than ever before, analysts included. After another wild week, this has never been more evident. It's a new world in the fantasy football realm, and we're all just trying to figure out what that means.

Heyo! Thanks for reading along for my Week 11 takeaways. You can find me and more of my work on Twitter @JeNateJackFF. Got questions? Shoot me an email at natepolvogt@gmail.com. See you next week!