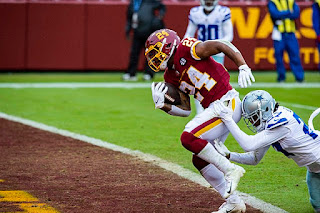 (Photo credit: Wikimedia Commons)
Nate Polvogt (@JeNateJackFF)
The Lateral Contributor
Week 8 was an interesting one. We saw the Jets eek out a win against a superior Cincinnati Bengals team, Tampa Bay beaten handily by a New Orleans squad riding backup quarterback Trevor Siemian and Justin Fields look more like what we had all hoped he would be. In addition to all of that, we woke up this morning to news that running back Derrick Henry is most likely done for the season with a Jones foot fracture. This season continues to be wildly unpredictable and incredibly difficult to navigate as a fantasy football manager. After all the madness, here are my takeaways from Week 8.
Holy Mike White

To say the New York Jets performance yesterday was shocking would be an understatement. Not one person saw them squeezing out a win against a very good Cincinnati Bengals team. Furthermore, who could have predicted that fourth-year backup quarterback Mike White would be the catalyst for an offensive explosion? Certainly not me. Yet, here we are on Monday, talking about White and asking the question, "was this real life, or just fantasy?"

What White pulled off yesterday against the Bengals was no small feat. He became only the second quarterback in NFL history to throw for over 400 yards in his first start. For context, Cincinnati hadn't given up 400 yards or 3 touchdown passes to any quarterback in 2021 prior to this week. They also had not allowed more than 30 fantasy points to the position this season. By any standards, his performance yesterday was impressive.

Now the question is, can he continue to be this effective in Wilson's absence? I believe so. In Week 9 the Jets face the Colts who are similarly decent against opposing quarterbacks, giving up an average of 20.7 fantasy points to the position. I see no reason White cannot have another outstanding performance. Then the question becomes whether or not head coach Robert Saleh will hand the reigns back over to Wilson when he is ready. Realistically, White gives them the best chance to win if Week 8 was for real, but is that the Jets priority sitting at 2-5 and more than likely out of playoff contention? You would assume yes, but this is the Jets. So, let's enjoy the beauty of Mike White now and see what happens.

Who had Justin Fields on their bench this week? Just me? Okay then. While it sounded like a nice idea that Fields would excel without Nagy on the sideline, all I could think was that the rest of the coaching staff remained the same, so his situation wasn't really changing. Boy was I wrong.

We finally got to see the Justin Fields we all hoped for when we were taking him early in our drafts as a QB1. He looked efficient, composed, dare I even say comfortable, on Sunday against the San Francisco 49ers. He didn't have flashy passing numbers by any means, completing 19 passes on 27 attempts for 175 yards, a touchdown, and an interception. However, we saw Fields getting comfortable outside the pocket, making throws on the move, and when nothing was there taking matters into his own hands on the way to 103 rushing yards and another touchdown.

Now what? Matt Nagy will most likely be back on the sideline this week when the Bears face-off against the Pittsburgh Steelers. There is nothing to indicate that Nagy will change anything within the offense when he returns. Chances are good that we see a return to the bumbling, incompetent game-planning we've become accustomed to when he is at the helm. We can only hope that the organization sees this and decides to move on from Nagy sooner rather than later, for both Justin Fields and the rest of the organization.

Antonio Gibson Is A Problem

I suppose this isn't an entirely new takeaway, but at this point in the season it's become punctuated. Antonio Gibson's production in the Washington Football Team's offense isn't what fantasy managers were hoping for when drafting him as a low-end RB1. Through 8 weeks, Gibson is averaging 11.95 fantasy points in Point Per Reception formats, making him the overall RB18 so far this season.

Yes, overall RB18 is still a mid-range RB2. What's concerning is that is mostly due to a Week 3 performance that was bolstered by a 73-yard touchdown reception and a Week 5 outing where he scored 2 touchdowns but only managed 60 yards on the ground. While I generally hate the "if you take away x" narrative, it's fair to apply it here. If you wipe the 73-yard touchdown away, Gibson is the RB28 on the season, below Josh Jacobs, Zach Moss, rookie Chuba Hubbard and teammate J.D. McKissic.

The simple fact is that with Gibson, you are chasing touchdowns. While we aren't seeing McKissic cut into Gibson's touches, he is getting the lion's share of the receiving work out of the backfield on a team that has been throwing the ball considerably more the last 3 weeks. With the upcoming schedule after their Week 9 bye that includes Tampa Bay, Carolina, and Seattle, don't expect that to change. Antonio Gibson is at best a low-end flex guy for the rest of this 2021 season.

Heyo! Thanks for reading along for my Week 8 takeaways. You can find me and more of my work on Twitter @JeNateJackFF. Got questions? Shoot me an email at natepolvogt@gmail.com. See you next week!