on October 28, 2021
Zach Crutcher (@ZackyNFL)
The Lateral Contributor
Whether it is bye week troubles, a late injury, or waiting on a rookie stash to finally get an opportunity, sometimes a warm body in the FLEX spot is all you need. Enter: It's A Match! These waiver recommendations are strictly to be considered plays for this week only. If they work out longer term than that, great. But that is not the expectation.
Also, all players are rostered in 50% or less of ESPN leagues. If there are better players still available in your leagues, go get them instead.
It's A Match! Three Matchups to Exploit in Week [8]
Philadelphia Eagles at Detroit Lions (1pm Sunday)
Who to add: Kenneth Gainwell, Running Back (Philadelphia Eagles) [49% ESPN]
Kenneth Gainwell is set to be a locked-and-loaded RB2 for as long as Miles Sanders is injured. The Philadelphia Eagles have struggled to get their running backs involved, but a matchup against the 0-7 Detroit Lions is an opportunity for head coach Nick Sirianni to right the ship. Philadelphia is favored by 3.5 points against the Lions this week so a positive game script for Philadelphia is expected. Detroit also allows the fourth-most fantasy football points  and an average of 120 yards per game to opposing running backs. With Gainwell's talent as a receiving back and the ability to succeed in positive, negative, or neutral game scripts, a matchup against a weak Lions' defense should be enough to see him finish as an RB2 or better.
Los Angeles Rams at Houston Texans (1pm Sunday)
Who to add: David Johnson, Running Back (Houston Texans) [34% ESPN]
The biggest element working in favor of David Johnson this week is not the matchup against a struggling Los Angeles Rams defense. Despite being a fearsome defense in 2020, the Rams have been average against the run in 2021 and have not fared well against the pass either. With a game spread of -14.5 favoring the Rams, Houston will have to throw to keep up. This is good news for Johnson, especially with former teammate Mark Ingram traded to the New Orleans Saints during the week. There is now less competition for touches in the Texans' backfield and quarterback Tyrod Taylor could return from injury this week. This season, Texans running backs have averaged a 20% target share, with Johnson seeing 24 of the 41 targets to the running backs. The Houston beat writers like Johnson and what he brings to the team going forward as well. Johnson can provide a solid floor in PPR formats as a bye-week fill-in with flex upside if things break right in Houston in Week 8.
Cincinnati Bengals at New York Jets
Who to add: Samaje Perine, Running Back (Cincinnati Bengals) [14% ESPN]
Samaje Perine might be the most easily acquired valuable handcuff right now. Perine has scored 18.3 and 14.5 PPR points in his last two games, and is in line for a huge workload should anything happen to Joe Mixon, the Cincinnati Bengals' starting running back. Perine has a good pass-catching profile and offers solid rushing ability. Just look at this 46-yard score against Baltimore last week. Even if Mixon is healthy, Perine still has potential in Week 8. The Bengals are 10.5 point favorites against the New York Jets this week, and in Week 7 we saw Perine take control of the backfield once the Ravens were out of reach. The Bengals could easily blow out the Jets, and we could again see Perine dominate garbage time and put up another impressive performance. Perine is a great stash and a viable flex play this week if you are desperate.
Follow The Lateral on Twitter (@TheLateralFF)
2021 Season ESPN Fantasy Football It's A Match! Matchups NFL October 2021 PPR The Lateral Waiver Wire Waivers Week 8 Zach Crutcher ZackyNFL 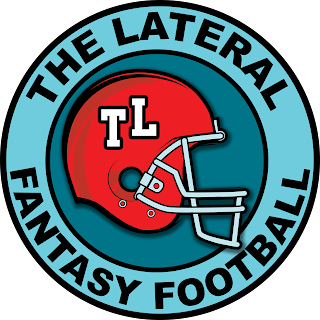 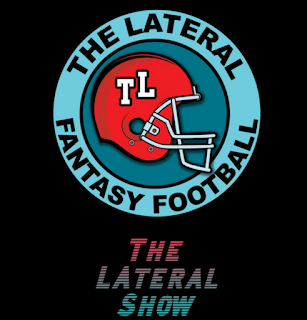 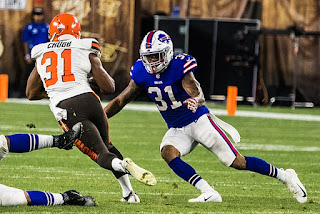 (Photo credit: Wikimedia Commons) Malcolm McMillan  ( @McLateralFF ) The Lateral  Editor [ EDITOR'S NOTE:  The  FantasyPros  ECR projected points listed are those at the time of writing and may change as the week progresses as they are dynamic in nature.] Week 8 Boom/Bust (PPR) Week 8 Booms Quarterback (QB) Teddy Bridgewater  (Denver Broncos) [17.1 projected points] As I mentioned over at BallBlast Football  this week, when Teddy Bridgewater gets to throw the ball, he does well in fantasy football. Regardless of whether the Denver Broncos win. Luckily for him, the Washington Football Team defense is exactly the defense to torch through the air. Expect Bridgewater to crack 20 fantasy football points in Week 8. Running Back (RB) Samaje Perine (Cincinnati Bengals) [7.0 projected points] Yet another player from the  BallBlast Football  Heat Check this week. If Samaje Perine continues to be heavily used by the Cincinnati Bengals, fantasy football managers can start him. Full stop.